It's been almost a year I posted something and two years anything Rogue Trader related.

Several years ago I got a box of used and assembled RTB01 Imperial Space Marines.
Most were more or less assembled as I would've done it. For a long time I wasn't sure how to paint them. I didn't care much about the classic chapters.

In the end though I decided to make them the renegade Night Lords.
Not in spiky Chaos style but old school Epic Space Marine Horus Heresy. 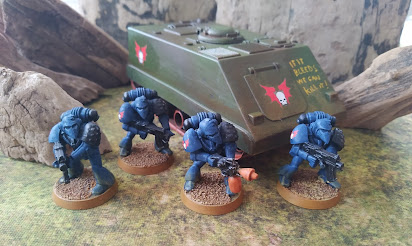 I love the early Night Lords artwork on the Epic box. At the time their symbol looked suspiciously like a Batman sign. Obviously changed for I.P. issues...

The APC is a really crappy plastic tank. Made in China from the 1970's or '80's it looks. Got it in a bag with a jeep and loads of cops many years ago.

These are so cool!
I've always loved those "beakers" but sadly there were no players nearby when I had too much time to waste on gaming, hobby, social life etc...

Nowdays real life kicked in and even if I get some classic stuff I have no time to share it with friends on full scale.

Life is just fuc#ed up enterprise... 😑

Keep your head up! 😉

Thanks! Yeah, I can relate about Real Life interfering.
I hardly played any wargame for the same reasons. Just collecting, modelling and painting.

Back days I've been underestimating the hobby but now I think it's just so great to have that thing to escape from brutal reality just to take a deep berath, rechagre batteries, regroup forces and then come back to fight 😉