The basic Marauder platoon is more or less finished for now.

First the second command group, Queen Selma and entourage.
In good pulpy 70's anime style, the queen is a blonde human woman commanding the blue aliens.
An android bodyguard, a protocol droid and two minions.
The queens head is from a frostgrave kit while the alien grey head is from an old resin Fenryll miniature. 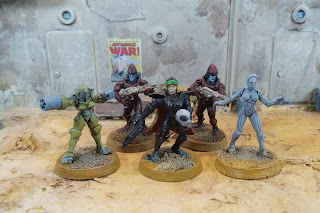 I repainted some of my old scratch build eldar grav tanks. The camo pattern was made using masking tape and dark grey and dark brown spraypaint. Afterwards I used red contrast paint over the original  pale green for a dirty, rusty effect.
Colours loosely inspired by Firefly Reavers of course. 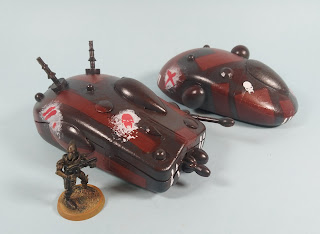 Chaos and space-wolf decals and acrylic pens for the details.
I only had satin/semi-gloss varnish so the are a bit too shiny at the moment. 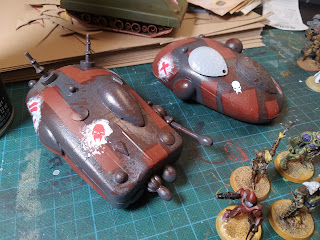 So here's the entire army for now.
Note the queen's retinue is variable. Here she's accompanied by a hunter-alien and a renegade space marine officer.

These are cool. I always have toyed with the idea of doing some mouse vehicles, yours are quite inspiring!