I made some progress on my Night Lords platoon.

Here are three dreadnoughts. Bob Naismith sculpts for Mongoose's Starship Troopers game. Grizzly Suits, obviously based on the book's description of powered armour which inspired the whole idea of powered armour ànd dreadnoughts to begin with. One painted in Night Lords colours, the others generic. This way the team or singles can be used for different armies. 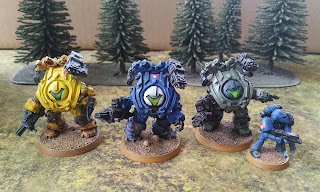 A converted toy tank. An old Starwars mini-rig from Kenner I got cheap on ebay. Inspired by an old photo in White Dwarf of the same toy converted into an Imperial tank. Again, no specific army markings. 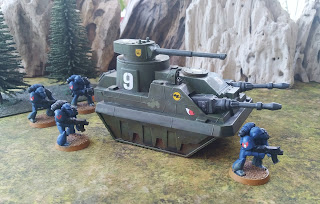 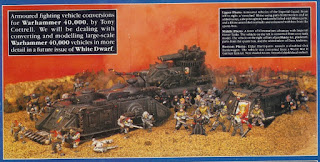 A Siege Dreadnought. A straight repaint of a vinyl toy I bought years ago.
The legs and torso seem inspired by 2nd/3rd edition dreadnougts. So I had to get it when I saw it. A recent GW release of their Horus Heresy siege dread inspired me to paint it. More or less the right proportions to the old plastic marines. 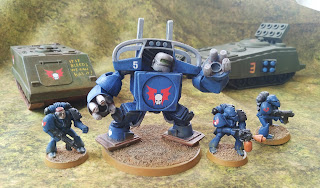 The toyline was Invizimals and the robot is called Vortex.