Yesterday I completed my second 40K army this year.
Apparently on the 35th anniversary of the release of Rogue Trader.

A Chaos Renegade army from before the Realm of Chaos release.

All miniatures from before RoC. Even though I don't think there was any mention of the Night Lords until Epic Space Marine and RoC.

Overall this looks like an ordinary Imperial army: Space Marines, Imperial Army/Guard, mercenaries, a Navigator and even an Astropath.
We all know though the Night Lords are Chaos Renegades. Vile traitors. The allied ordinary humans probably don't have any clue of the mess they're in. 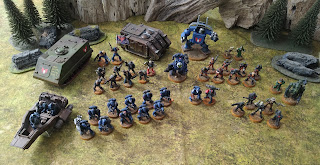 Some close ups of units I don't think I showed before.

A Navigator with bodyguard of elite Stormtroopers: 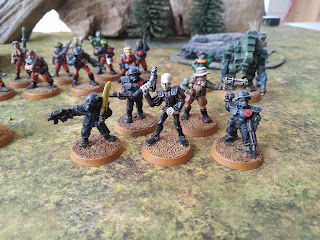 Two renegade marine psycho's.
Starting out as non-chaos renegades a few years ago I decided to re-paint them as Night Lords loonies. One is waving the original 'Lords banner from the Epic box art. Strong Batman and Hordak vibes. 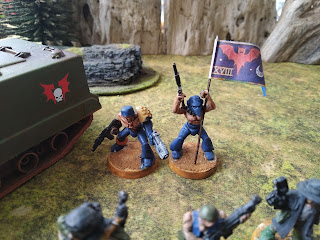 The Responsible One said...

This is a lovely nostalgia inducing project. Great job!