I tried out a new techniche to paint old bronze.

These are a couple of the few Foundry ancient germans with helmets. They are evil brigands and grave-robbers. While situated in a dark ages setting I suppose the old Roman and celtic helmets and armour were taken from ancient burial mounds.
Allied with ghouls and possibly even revenant peat-bog bodies. I imagine them nasty bastards a bit like the barbarians in Moorcock's Corum.

Same thing with the beastman. The helmet, shoulderplates and jewelry are beaten bronze while the chainmail and axe are rusty iron, in ancient celtic fashion. 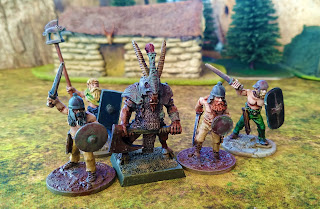 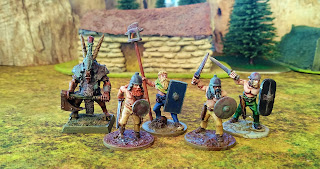 I finished my Dark Ages chaos warriors. Half of the group I did years ago, when Frostgrave came out. These are nine warriors in 11th century armour. Adding a leader it will be a perfect unit for Oathmark. Possibly chaos armour, grown into the bodies of these damned knights.

The idea is that in a setting with a 5th century dark age technological level, elves and dwarves have better armour. Resembling Norman armour more or less. At which point Chaos Warriors in magical chaos armour may have their entire body covered in chainmail.

With a new Oathmark supplement released covering the Undead I dug up some old stuff and painted some new things. 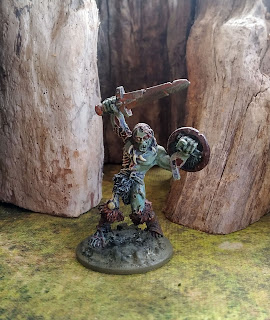 But there's also old Slough Feg, an old Fantasy Forge miniature. It was supposed to be part of a Slaìne range that never got released. Available from North Star. 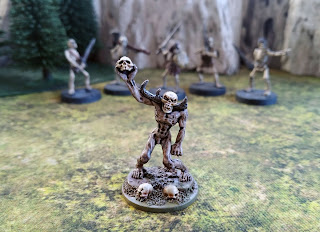 This morning I painted some maniac ghouls. All Citadel contrast paints as they are test models. I absolutely love the concept of ghouls. Insane, degenerate inbred cannibals. The concept of degenerate men seems to have been a trend in the early 20th century.

Lovecrafts ghouls, Edgar Rice Burroughs' apemen of Opar, Tolkien's orcs, Robert E. Howard's Bran Mok Morn Picts, Morlocks... In the end it seems they're all tapping from the same concept or metaphore implying moral degeneration leads to physical degeneration. Or uglyness and physical impurity is a sign of moral decline.

Something like that. In any case there aren't any ghoul miniatures that I really like. Believe me I've searched everywhere. So in the end I decided to settle with naked human fanatics. I'm a rather childish guy and the idea of hordes of naked men makes me laugh. These are test figures. For a full unit I will use Foundry naked Spartan hoplites, tribal africans and ancient germans. I tried to paint these as sickly and disgusting as possible. 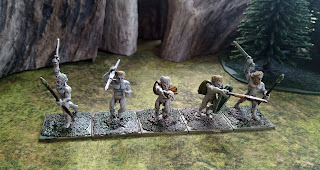 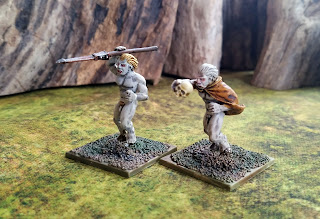 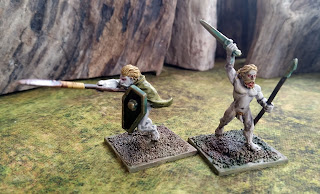 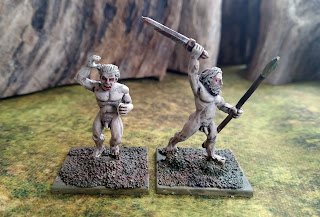 I rebased these Undead for Oathmark on 25mm square bases (Renedra bases that come in the plastic goblin and elf box sets).
Figures are Grenadier Miniatures (Mirliton), by both Nick Lund and Bob Naismith, and painted as the Deadmen of Dunharrow. 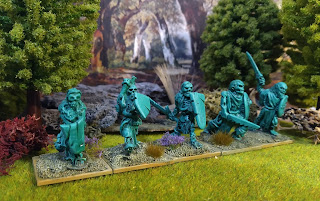 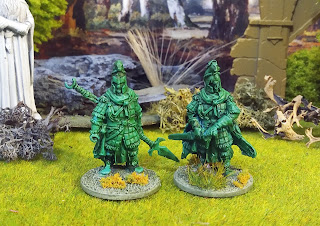 These orcs are 20mm. figures originally by Rebel Minis. I bought them years ago when the dollar was low and intercontinental postage from the US was still affordable.
I really like the old MERP vibe, straight from the Angus McBride paintings. 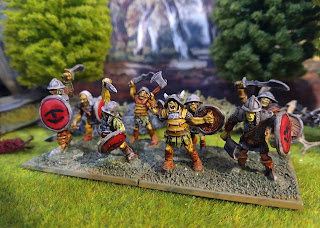 The country has been shut down.  Coronavirus lockdown. Curfew. Were not supposed to go outside if not for a good reason. Most shops are closed apart from those that provide basic needs.

So what better to do than paint some old Nick Lund orcs and goblins I've been keeping in boxes for  like thirty years? 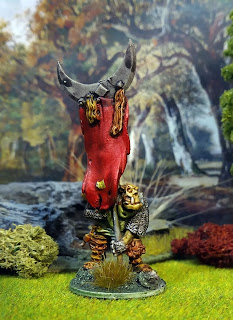 A Gundabad goblin king or chieftain with bodyguard. Interesting how Grenadier orcs differed from goblins in appearance but not necessarily in size. 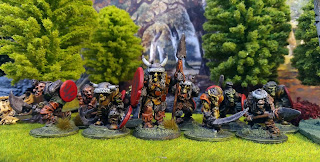 I had the chance to buy this wonderful original Grenadier box set. The Barbarians Starter Army. 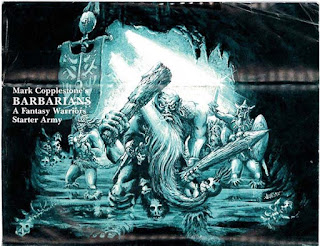 I had seen the photograph of the back of the box before, in the unreleased Fantasy Warriors Campaign rules.
The interesting thing about this box are the uncatalogued characters that are included.
The Barbarian Giant with a head- and weapon variant (which was briefly re-released by Forlorn Hope some years ago) and a command group, still available through Battlefront Miniatures and Mirliton.
The box has no product code. The only thing that can be said at this moment is that the box has this colourprint wrap, similar to the Barbarian Battle Giant and the Killzone game box.
Grenadier UK at the time was investing in a better, glossy presentation of some products, just after the release of Fantasy Warriors.
I don't know if starter army boxes for other races were released. 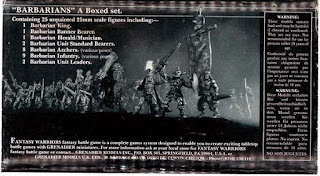 It actually never occurred to me that the giant and characters were not catalogued at all.
The inscriptions in the base say 1991, a year after the other barbarians. The musician/herald has a varation as cavalry while the banner bearer has a variation with a seperate, slightly different, banner pole.
I also  have a  variation of the barbarian King with a round 'character' base. 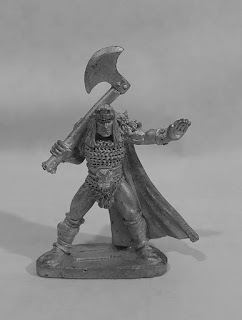 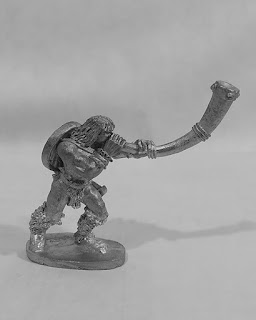 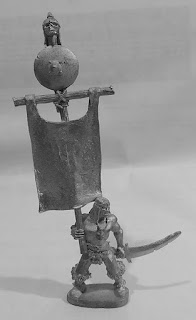 The entire set, a mix of miniatures from the blister packs. I have no idea if the contents were random warriors and archers or if every box was the same: 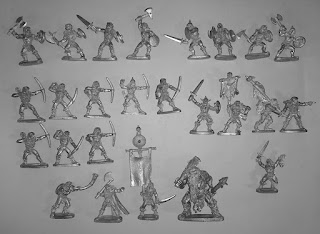 A quick post, mostly to link the pictures elsewhere. 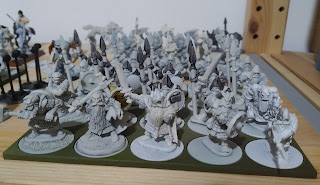 The new Renedra moving trays are pretty cool too. I'm resurrecting my old Ancient Germans project with it. 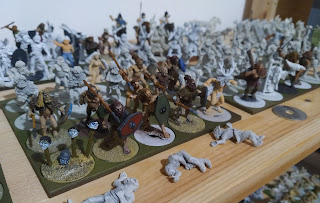 In the meantime I've been doing very little. Real Life and all that.

What doesn’t kill you, makes you stronger.

I had this fancy to do some Mordheim warbands using only Grenadier Fantasy Warriors humans.
So I was sifting through a load of old mediaeval and fantasy miniatures and I stumbled on this Blood Bowl starplayer. Continuing my rusty grimdark experiments I made it into some sort of an iron golem (not to be confused with those new GW Warcry plastics, I mean an actual golem or automaton). 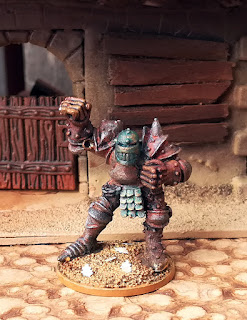 I'm quite happy with the results, but something went completely wrong: I became obsessed with Mark Copplestone's early Chaos Warriors. Back in 1989/1990 I thought these were crude compared to Jes Goodwin's but now I actually prefer them.
Someone on the FB oldhammer trading company offered some of them which I couldn't refuse. Then I started asking and searching ebay and now I'm expecting a bunch of overpriced metals to join these guys.

For as far as I can tell the folowing warriors and champions were done by Copplestone. Warrior with massive mace is uncatalogued.
Warrior ten actually has a hound/wolf shaped helmet. Something I never would've guessed from these pictures.
Note that these have all similar codes in the Blue catalogue, while Goodwin and earlier warriors have different initial numbers. 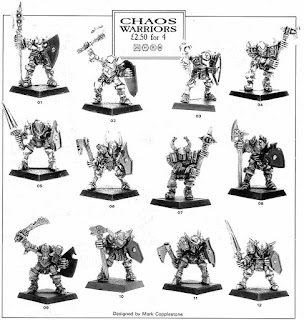